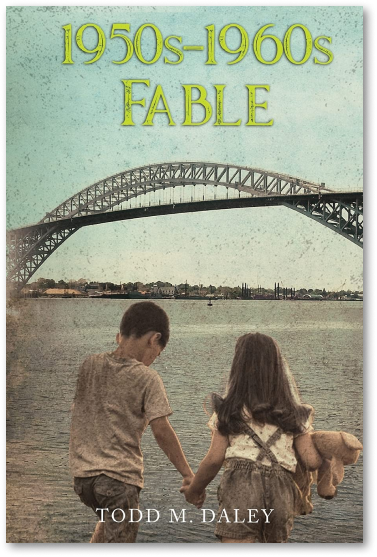 The story begins with two children, Tom and Cara, who live with their foster parents on a 12-acre farm in South Jersey. They are taught to help out around the farm – weeding and watering the garden, feeding the pigs, chickens, and the turkeys. Occasionally the kids were late for school for a good reason – the pigs got loose. Though wide in girth, pigs are quick on their feet and slippery skinned from rolling in the mud. Then, the children move to the North Shore of Staten Island with their birth parents – adjusting to parents with different rules and different values, making new friends, and learning urban street games like punchball, stickball, and jump rope. Their dad’s occasional drinking binges presents a new problem for Tom and Cara, who like most children, are highly adaptable.

Interspersed in the narrative are sketches of important people and events of that era – Presidents Eisenhower and Kennedy, Jonas Salk, Billy Graham, Bill Wilson (AA), Dick Clark  John Lindsay, the Korean and Vietnam wars. 1950s-1960s Fable is a fast-moving, upbeat story which is funny, sad, and optimistic, with larger-than-life characters who do not fret over life’s misfortunes. The book is about conflict, endurance, and growth during an idealistic time in American history.

I recall growing up in Elm Park during the late 1950s where dads worked in Wallerstein’s factory and moms worked in lower Manhattan as clerks. The buses ran every 15 to 20 minutes around the clock. The #3 bus took a meandering route mostly along Castleton Avenue, ending with the St. George ferry. The public schools provided a sound education in which students mastered the times tables, English grammar, and read books by Twain, Poe, Dickens, Doyle, Melville, Fitzgerald, Joyce, Wolfe, and Hemingway. The boys played stickball in the street with a Spalding and a broomstick bat, while the girls played jacks and jump rope on the sidewalk.

In the winter, we’d bring a shovel to P. S. 21 playground to clear the snow from the basketball court in
order to play basketball. In the summer, we’d organize softball games with the paved infield and grassy outfield. This was before the current age of computers in which kids now sit in front of a screen all weekend. Maybe that’s why the current epidemic childhood obesity was rare in bygone days. Every adult on your block acted as a quasi-parent, so kids didn’t get into trouble when their parents weren’t around. Children had rules – living a balanced life with time allocated between school, play, and chores, and reading. Once our TV broke and my mom said it would stay broke. She said our grades would improve and we’d read more. She was right of course.

I went to Port Richmond High School where I took academic courses (Regents track) which included four years of math and Latin, plus chemistry, physics, history, and English. I went to CCNY for my bachelor’s degree, Johns Hopkins for an MAT degree, back to CCNY for a second master’s degree, and finally to New York University for a PhD in education. I taught NYC high school and New Jersey junior college physics and math for a total of 50 years.

I didn’t start writing fiction until I was near retirement. I did write a couple of math textbooks while teaching – one of which was a cutting-edge books combining reading and math .My five novels are: 1950s-1960s Fable, 1960s-1970s Fable, The Mariners Harbor Messiah, Blue Collar Folks, and The Pulaski Prowler. Along the way, I also wrote a Brief Guide to Philosophy, which surveys western philosophy for the man in the street. 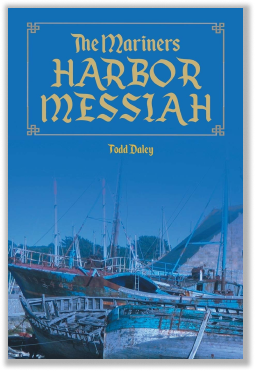 This book is about a charismatic young man with extraordinary powers of healing, compassion, forbearance, and clairvoyance – named Amon. Living in an abandoned tugboat on Staten Island’s Mariners Harbor waterfront, this modern day prophet performs everyday miracles while doing good work for the homeless and the downtrodden. Amon is befriended by a high school science teacher, Tom Haley, whose rational perspective differs from Amon’s spiritual reference frame. The story takes place during the turbulent 1970s when the country was torn apart by the Vietnam War, social change and unrest, and the sexual revolution. The contrasting lifestyles of the two friends are examined, along with the drinking culture of Staten Island’s North Shore, in which the corner bar is the focus of the neighborhood’s social life. The fast-paced story is interspersed with thumb-nail sketches of 1970s celebrities and events: Richard Nixon, Gerald Ford, Jimmy Carter, Gloria Steinem, Ralph Nader, Albert Shanker, Muhammad Ali, Hank Aaron, the Fair Housing and Roe v. Wade court decisions, and Alcoholics Anonymous. The concepts of economic disparity, ethnic conflict, spiritual-secular balance, and changing sexual mores in an evolving society, and idealism in the work-a-day world of 1970s America provide a backdrop to the unfolding plot. Notwithstanding their differences, the friendship between the two protagonists, Tom and Amon, is an ongoing motif in the story.
BUY NOW 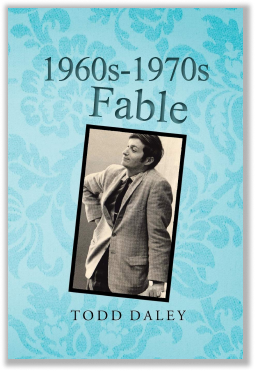 Upon graduating from C.C.N.Y, Tom has begun teaching at Curtis High School, located on Staten Island’s North Shore, where he faces the formidable stone gargoyles of the school’s façade and his challenging Aquarian age students. Each day, the young science teacher starts his lesson with an attention grabbing practical experiment that occasionally backfires, to the delight of his students. His lessons cover a wide range of topics – including Newton’s laws of motion, Galileo’s free fall, the simple pendulum, Mendeleev’s table of elements, Darwin’s evolution, Mendel’s heredity, household chemicals, the laws of probability, British kings and American presidents, plus ancient Greek and Roman philosophers. In his spare time, Tom gets caught up in a whirlwind of drinking, bar hopping, random dating, schoolyard stickball and basketball games, and an experiment with maze-running white rats. Haunted by the loss of his high school sweetheart and the endless raging Vietnam war, the rookie teacher seeks a place in the sun amidst the social turmoil of the late 1960s and early 1970s.
BUY NOW 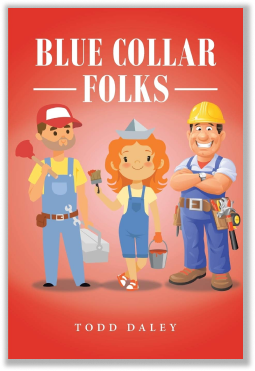 Tom Haley, a science teacher, is doing research on the effects of nutrition on maze-learning ability in white rats. He compares the maze learning ability of malnourished rats with their well fed peers. While working on his rat project, Tom visits his girlfriend, Joanie, who suffers from chronic headaches. In desperation, he visits the site of his deceased friend, Amon, and begs for his help. When alive, the charismatic young man had extraordinary powers of healing, clairvoyance, and compassion. Soon Joanie is home again – happy and healthy. To earn extra money during his sabbatical leave, Tom works as a Bradford guard working at the pollution spewing Con Ed power plant and guarding the rude tycoon Darren Troop. He also does odd jobs painting and repairing dilapidated houses with Harry the Horse and his close knit group of blue collar workers. In between, Curtis principal Lou Stout calls on him to fill in for absent teachers – covering classes on the Presidents, unions, democracy, photosynthesis, nutrition, motion, energy, the elements, and even philosophy. While doing manual labor, Tom meets interesting characters like Billy and his invisible companion, and Rosa who epitomizes the everyday people who keep this country running. Most importantly, he masters the rhythm of work in which time works for you in the course of doing a difficult job.
BUY NOW 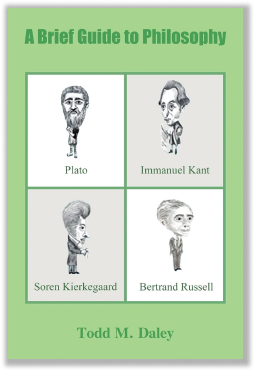 A Brief Guide to Philosophy

Philosophy has been viewed as an obscure, difficult subject with no connection to the real world. This book presents a clear, concise survey the basic ideas of the major philosophers of western civilization starting form the ancient Greeks, through the philosophies of the middle ages and the renaissance to the philosophy of the modern era. The various schools of philosophy – rational, irrational, idealist, empirical, dialectical, existentialist, and analytic – are described in understandable language. Emphasis is placed on the big philosophic questions: What is ultimate reality? What is good and evil? What can we know with certainty? What is the meaning of life? Grappling with such questions helps us to conduct ourselves in this troubled world.
BUY NOW 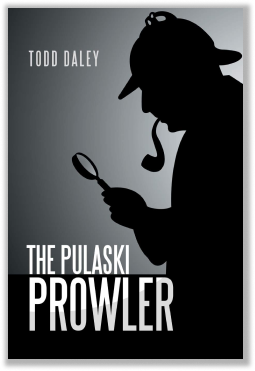 Tom Haley, a rookie college teacher, is awakened by someone fiddling with his front door. Rushing downstairs, he sees a man hurrying down the street with a pronounced limp. The following day, he looks around Pulaski Avenue on his old red bicycle. He stops at the flats, a string of flat-roofed attached houses, where he meets Marcie Flann, a sensual waitress at the Prima Diner. Despite differences in background and outlook, the two begin dating. In the meantime, Tom helps the local police solve a rash of burglaries in the area. Through patient sleuthing, he learns the prowler’s name – Ron Luco, where he grew up and had gone to school. He also discovers that Marcie was Luco’s former girlfriend. A local jewelry store heist is linked to Luco, but through intimidation and an alibi, he is acquitted. Later, Marcie is disturbed by someone walking on her roof. By the time Tom arrives, the elusive culprit is gone. The plot turns, as Tom finds himself under surveillance by the relentless Luco, who carries a handgun. Amidst a stickball game at local schoolyard, Luco shows up – threatening Tom and Marcie with a gun. The narrative is interspersed with thumbnail sketches on racism, antisemitism, sports, infectious diseases, nuclear energy, algebra, statistics, history, poetry, immigration, and philosophy.
BUY NOW